It was nothing but Spectacular!

We organised an IELTS Launch event on Thursday 27th February 2019 at our Ras al Khaimah Centre.

We are officially open for IELTS registrations and paper based tests!

For Staff and Students 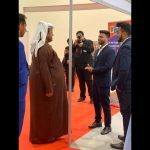